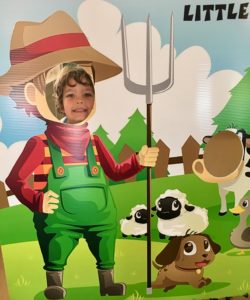 Amidst all of the recent turmoil, I remind myself of an article that I read recently about how serious play enhances social empathy. I feel this way about adventure days with my littles. Our latest adventure was visiting the Florida State Fair for some local fun and exploration. I am very aware of our limited financial resources, however, with children under 5 free, and discounted adult admission tickets online ($13), it seemed affordable… as long as we didn’t go on any of the rides (these range from $3-$5 per person). I tried to map our route as to avoid the lure of the midway.

With my littles swarming about me while I try to hand the security my backpack and tickets, I was surprised to be told that the fair only allows one water bottle per person into the fair. No toddler snacks. I don’t know about you, but my little threenagers are not really into fair food. They want applesauce and “cackers” and juice boxes. Even Henry was appalled when we were told that we could just throw the food away! So, we trudged all the way back through the “gijantical” parking lot to return the food. Let me just say that parking lots are probably the most hectic part of ANY of our adventures. 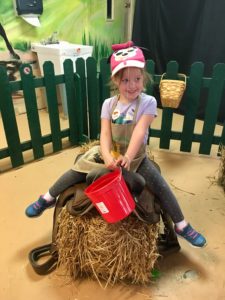 Finally making it inside, I pinned “if lost please return me” buttons on their backs that included my name and cell number – just in case one wanders away. I briefly thought of making temporary tattoos, but just haven’t found the time to get those printed. Since George really loves cows (and he also really loves hamburgers), off we went to the agricultural exhibits. On our way, Henry saw a poster that describes all of the different cuts of beef. He immediately lept in front of it, stretching out his arms to cover as much as possible, explaining with wide eyes, “Mama, hurry past! George is too little to understand this yet.” Once there, we saw beef cows, dairy cows, (yes – long discussion about the difference) chickens, sheep, and their favorite, kids (baby goats). Alexandra was laughing so hard that baby goats are called kids that she was slapping her knee! Finally, I wrangle the littles out of that exhibit and onto the next, encouraging myself to be patient because I know that movement helps structure their knowledge of the world. It is their way of knowing, and, through movement play, they actually think in motion.

As we began to meander along (you really can’t describe toddler walking in any other term), when Henry then turned to me and asked why when we eat cow do we call it beef? Or when we eat pig we call it pork? But not fish or chicken. We have been practicing how to find information when we don’t know something, and I am fairly certain that this question was well beyond my scope (although, I have been known to just make stuff up out of pure exasperation some days!) Since it was time for a rest/snack/water break, I found a spot where the triplets could be entertained by music, and pulled out a blanket. It turns out, for those of you who are curious, it apparently all goes back to the Norman (French) invasion of Britain (1066). It seems that the lower-class (Anglo-Saxons) were the hunters, thus the animal names are English origin. Meanwhile, the upper-class (French) only saw animals as food (on the table), so culinary terms are French. For example, Anglo-Saxon pig = French porc (pork). Anglo-Saxon cow = French boeuf (beef). Sheep/mouton (mutton). Chicken = Poulet (pullet) – but now pullet is only used to refer to a young hen. And what about fish? Fish in French is poisson, which apparently is just a little too close to Anglo-Saxon poison. And if this hasn’t put you to sleep yet, as it the triplets to sleep, you can always read more about it here!

Once everyone woke, we headed over the children’s area to visit the “Moo-ternity Ward.” We got to bottle feed a baby calf, feed seed from our hands to the baby goats, and hold a baby chick. I still have horrible flashbacks of Alexandra petting the chicken gently with her two fingers stating, “I like chicken nuggets!” From there, we did the “Little Farm Hands” exhibit especially for the toddler set. (It says up to 10, but at 5, Henry was at his limit). I love how creative play helps us to transcend the reality of our ordinary lives, and in the process develop new ideas that we can shape and re-shape.

Another big hit was the Florida Forest Discovery Center. They met foresters, fire fighters, and scientists and got to climb on construction equipment and into a rescue helicopter. One Forester asked if they had any questions. Henry quickly piped up, “Why do trees fall in the wind?” The forester answered, “What comes up must come down.” Henry looked at him, tilted his head, and said, “I think it is from wind and when the roots are in sandy soil like ours that can’t hold on tight enough, especially after it rains.” The forester, surprised, agreed and said, “Wow! You know a lot about trees already.” Henry gently responded, “Yeah. Do you want to meet my teacher? She could probably help you learn, too.” 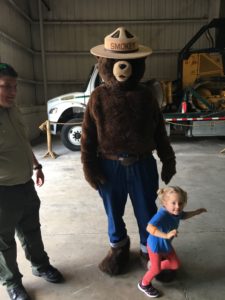 On our way out, we saw “Smokey the Bear,” who was so tall that he was a little intimidating. Only Victoria the Brave slowly snuck up on him, but then quickly darted away. We spent a SURPRISING amount of time at the steam engine exhibit. Apparently, this is one of the largest collections of 19th and 20th century working engines. I know way more about steam engines than I really want to know. I will spare you on this topic. Finally worn out, we made our way back to the minivan and they were all asleep before I even exited the parking lot.