Some days the enchantment is easier to find than others. Amidst the mundane blur of laundry and cooking and tidying and baths, and through the frightening moments of braving the dark of cancer, there are moments of joy, bursts of love, and glimpses of hope. 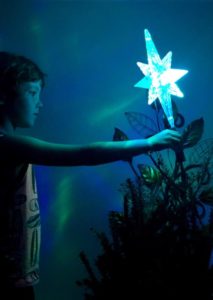 From the outside, it may seem endearing, those endless questions from the triplet newly-minted four-year-olds (Victoria, George, and Alexandra.). “Mama? Mama? How does a fan work? Do we only feel it when we are hot? Are we hot because we live close to the sun? The sun is hot. It can burn things up. Is that lava on the sun? Did you know that the sun is a star? Are volcanoes stars? They have lava. I lava you, Mama. Mama? Mama?” Somedays this just makes my teeth hurt.

In search of something to engage their growing creativity (and provide some moments of respite for mama), while also recognizing that night falls early and so our play has shifted to inside, I took a deep breath, and embraced the likelihood of enormous mess, and somehow them convince me to let some very generous people give them giant boxes to build their very own box forts.

A trip to the store also ensued (which likely explains my developing gray hair) so they could select stickers, markers, colored duct tape, pipe cleaners, and Pom-poms to personalize their box forts. They even cut out windows and skylights. They were entertained for days. (I mindfully practiced calmly climbing around box forts and curiously pulling stray stickers off my clothes for days.)

After Alexandra made “snow” on her box fort, I figured they might enjoy a trip to our city park’s Winterfest. Victoria took one look at the snow and raised her eyebrows suspiciously, while Alexandra exclaimed loudly that we don’t have “weather gear” for this activity, but George, as is his way, enthusiastically tested out the snow-machine-made sledding hill.

Chattering about their adventure while walking back to our car, Henry (age 5) spotted a “box fort” on the sidewalk with an adult sleeping inside. Curious, he asked me what was happening and quickly became very concerned that this is where a person was likely living, or at least finding some shelter, and the box, damp from the recent rain, was falling apart.

Later, as I was doing yard work, I noticed that they were collecting sticks, cleaning them, decorating them, and then carefully placing them at the end of the driveway, as if on display. I watched as they wrangled chairs outside and sat behind their row of sticks while holding a sale sign. Upon inquiry, they explained that they were earning money to help people who had to live in a box, instead of just play in a box, like they did. Anyone that passed was shown the “musical instruments” that they had made, demonstrating that you can’t just buy one stick, you have to buy two to make beautiful sounds. They sold ten.

That night, we went out to enjoy the holiday lights at the park and to visit Santa. At first I was startled when Henry told Santa that he wanted a million Legos. But, when he explained that Legos are waterproof and he wanted to make portable creations for people who are homeless to sleep more safely than in a box, even Santa got a tear in his eye.

Yes, there are darknesses in life. And I am grateful for being able to endure the dark, because it has granted me the gift to truly see the brilliant light of my little stars.