“Why do you have a girl water bottle?!” I paused hearing this child’s reprimanding voice from where I had just dropped off the littles for their summer camp. Slowly, I turned around to determine if I needed to intervene. Henry, then 4 years old, looked at his pink water bottle and then back up with a slightly perplexed looking on his face and then, rather nonplussed, stated, “No, it’s not. Because I am a boy.” The other child was quick to point out that pink is a girl color. I can still remember how I caught my breath, holding, watching, not sure if I should pounce or just sweep Henry up and rescue him from this situation. Before I could move, Henry smiled and replied, “That’s silly, colors aren’t boys or girls. And I like ALL colors. And that’s just fine.” 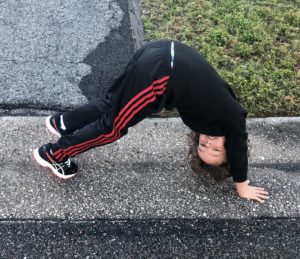 I remember later that same year when an adult (a stranger in a store as I was trying to wrangle four small children and buy milk!) asked if Henry’s “babies” were boys or girls, Henry (age 4) quickly responded, “They don’t know yet, they are only two years old. They are just people.”

And then, when George was 3 years old and Henry was 5 years old, George wanted to wear “hair pretties” like his triplet sisters. Grandparents fussed at George, but Henry jumped right in and said, “Now, really, he is just three years old and likes to be like his sisters. Let George do George. He will figure it out just fine and then let us know.”

Oh, there were little moments before these big ones. Before they were even born, blue clothing was given to my boys and the pink clothing to my girls, but to be transparent, when I had four under two years old, whatever was clean is what was put on them. Okay, truth, at least not smelly with fewer than three stains.

Now, Victoria (4 years old) happily points out that as the smallest triplet, she has the most choices of clothing because she gets everything that her siblings have grown out of – whether they are “boy” or “girl” designations! To be fair, things have improved somewhat. Alexandra (4 years old), will clearly tell you that my rule for getting dressed for school is “clean and weather appropriate.”

This past week, however, my newly minted 6 years old, Henry, was given more decision-making power when we went to buy new school shoes. (Why, oh why, do their feet grow by sizes every few months!). On top of that, his feet are narrow and I consistently find that shoes made for “boys” often fit his feet too loosely. I end up trying to tape or sew or make him wear thicker socks or somehow adapt them to better fit his feet. (Luckily, he does not wear them out too much and George is right behind him in shoe size – with a wider foot.)

Currently, Henry is also in this phase where he likes “bright” colors. His school only has a few restrictions about shoes; playground friendly, no characters, no lights, and no sounds. Within an hour we were both frustrated by the way too much time that we had spent in the shoe sections of way too many stores (seriously, I usually just order shoes online to avoid this chaos, okay, well probably to avoid having to shop at all). So, I was thrilled when I heard his voice chirp that he finally found these “fantastic, fast, and bright shoes!”

I turned around and noticed that he was in the “girl” section. Ugh. My brain battled, telling myself that this is fine, that I can support a reasonable choice. But I still was sorting out how I was going to navigate that they are more obviously categorized as “girl” shoes. And then I was angry that it seemed to matter to me. But, I know why it matters. I don’t want Henry to be made fun of at school. He has a tender heart. (And apparently, mine is also tender in relation to him.)

So, I smiled while he tried on the “fantastic” shoes and we found that they were a perfect fit. I bought the shoes. And then I emailed his teacher that night “warning” her about the shoes and explaining that I supported his decision and that I would appreciate if they would squash any unkind comments that might come his way. I apprehensively dropped him off at school the next day. He went off to his friends skipping. I kept checking my email, refreshing it (hundreds of times) when I checked, just in case. Gratefully, his teacher responded before I picked him up from school. She was soothing and gently explained how proud Henry was of his shoes and that it did not seem to be an issue.

After school, I asked Henry how his day went with his new shoes. He excitedly shared that his teacher loved his new shoes and that another friend (who is typically considered a boy) has shoes that other people think are “girl” shoes and he was happy that Henry had bright shoes, too. “Mama, I think it probably helped his heart, too. Maybe he is not sure if he is a boy or a girl. Or maybe he just likes bright shoes like me. Or maybe his family shares shoes when someone grows out of them like we do at our house and they might be from a sister. Mama, really, shoes are just shoes. And we are just people. And people can like all sorts of colors or styles.”

This most recent experience is a reminder to me how gender stereotypes are mostly implicit and unconscious. Interestingly, explicit messages (e.g., dolls are for girls) are rare in societies that value gender equality. Yup, studies show that in cultures where gender egalitarianism is more prominent, parents (and other primary caregivers) don’t report gender‐stereotypical ideas.

I recognize that I am a person who leans more into the “serious” side of life. Add to this my complicated and lengthy (12 years), somewhat grief-stricken (9 miscarriages total), journey to motherhood, and I am tempted emotionally by what I logically understand is overprotection. On top of that, as an experienced (cough, cough, more than 20 years) mental health practitioner specializing in families, I far too well understand that these early years are significant to their overall socialization, and particularly impactful to gender socialization.

But I have also been graced to watch Henry successfully invite more inclusion by making more space for what we might think is out of the social norm – more ways to conform to the standards, the expectations, or the typical responses (and anyway, statistically normal is just a weird a distribution curve, with the so-called ‘normal zone’ accounting for 95.45% percent of all the data.).

In each of these situations, I clearly remember taking in that deep breath of relief, grateful that Henry somehow knows ways to handle these situations, or rather, that he handles them in a way that is congruent with our values. Still, a part of my heart aches that we live in a world that far too often encourages this type of exclusion and disapproval. Henry continuously reminds me that our best protection is to help make the world a gentler place.