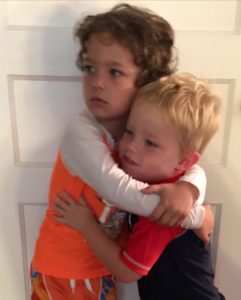 Yesterday, Henry, now 5 years old, noticed the flag at half-mast on our way to school. “Mama! Look! Oh no. Oh no.” Tears begin to form and his voice quivers and he whispers, “Mama, who died? Mama? Mama? Were they shot, too? Mama! Talk to me! Do we know them? Did someone hold their hand when they died so they were not alone? Do you have to go to more funerals?”

Holding back my own tears, I find myself having this conversation my littles yet again. For months after the Orlando (June 12, 2016) mass shooting, a loss that touched us in very direct and personal ways, Henry, then 3 years old, began asking daily, “Mama, is it safe to go outside?” My heart ached to reassure him that it is safe, knowing that it is not. My arms ached to hold him back from any danger that might be lurking outside. At the time, I held his hands and kissed his nose and said that sometimes it is dangerous, and sometimes we have to be careful, and sometimes we will risk being hurt, because we will always continue to live our lives as joyfully as possible. This went on for months. He still asks on occasion.

Yesterday, I received the email from my children’s school with the subject line “School Safety” describing the “active-shooter drill” and other efforts they have been making to ensure that my littles are safe while in their care, everything from the city police evaluating their procedures to the self-locking doors of the classroom, the double fenced entrances, the surveillance cameras, and the regular in-service training for teachers and staff to review and practice these procedures. I know several parents who tuck those little $2.00 hardware store door-stoppers into their children’s backpacks so that they always have access to barricade themselves safely inside a room.

I believe that whenever my child brings up ANYTHING, we talk about it. I didn’t expect my three year olds to have questions about mass shootings. And no, they don’t watch the news. But we have lived through the loss of many in Orlando. And, as my grandmother was fond of saying, “little rabbits have big ears.” They hear adults talking about the shootings. They hear it in carline. They hear it at the grocery store. They hear it at the playground. They are not watching violent movies. They do not play video games. They do not have mental health disorders. They are curious toddlers.

I am grateful for all that the school does, but I am angry that my five-year-old and my three-year-old triplets know how to duck and cover. That when they see someone in public becoming angry and aggressive, they worry that they might have a gun (which is not unlikely in Florida, a state where you don’t need a permit or license to buy a gun, you don’t need a permit to carry a gun, you don’t need a permit to conceal and carry a shotgun or a rifle – you do need a permit and to meet 3 requirements to conceal carry a handgun, and you don’t have to register a gun). That they know how to whisper. That they know how to be very, very still. I try to make light of these new skills. Our Hide-and-Seek games have taken on a whole new level for us. But when Victoria (3 years old) mischievously convinced everyone to give her their shoes because she figured out how to get the car window open and drop them all out onto the road on the way to school the other day, well, the anger dissipated. My heart is too heavy. Because, I can imagine a day where I might retrieve their shoes from the side of the road for some other, more nefarious, reason.

And then it boils up again when yesterday, I was approached in a professional networking setting and asked, “Since you are a mental health therapist, how crazy do you think the shooter was?”

I took a deep breath and tried to explain, “I think people have confused mental health with violence. In my experience, people with mental health issues are the more likely to harm themselves, if anyone at all. Furthermore, I see people with mental health issues most harmed by others who bully them or exclude them or treat them differently because of our mental health stigma. People that are harming others aren’t mentally ill, they are taught to solve problems through violence, they are taught that people that are different than them are worth less than them. We live in a world where violence has not only become a norm, it is glorified. In a world that is festering with social injustices because of how people talk, or look, or pray, or love. A world where our most vulnerable populations, including our children, are apparently disposable.”

“Well, my buddy and I think he is crazy.” He said, pointing to his friend who works as a financial planner.

I tried to hold my tongue, however, too quickly I responded, “Well, fine then, Don’t trust someone with a PhD in Clinical Psychology who also is a licensed practitioner and associate counseling faculty at a college when you are trying to make an informed decision about mental health. Trust your buddy who is an expert in what, accounting?”

At this point, the person next to me practically spit their drink out through their nose as our visitor walked away saying, “You are such an angry b*@#.”

Well, you are right on that front. I am angry. And I am a mother. And I will continue to stand up for all of our children as well as our most vulnerable populations until we can figure out how to live in a more compassionate and socially just world.