Many adventures begin with a lot of excitement and a bit of trepidation. This one was no different. Our grand summer adventure included an overnight train trip followed by a six-hour road trip to arrive at our campsite where we slept in a tent for five days before repeating in reverse the same travel trip for our return. The littles boarded the train with filled with anticipation as they were convinced that we were on the Polar Express. 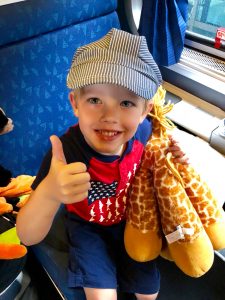 Once the train was moving (and it DOES move!), we held on to anything within reach as we explored EVERY car where passengers were allowed to be. They loved the lounge car (windows that are floor to ceiling!), the dining car (which, by the way, only seats four at a time – this proved a bit tricky with four young children), and the sleeping cars (we had three rooms that slept two people – wisely, they re-assigned the rooms upon check-in so that we were all in the same car AND on the same floor.) Finally, we settled on hot chocolate (see Polar Express) in the lounge car as we watched the scenery scroll by. George (age 3) kept saying, “Wow! Wow! Wow! We are in a rocket ship!”

For those with computers, the train does have Internet, however, it is not fast enough (nor stable enough) for any of my computer work (or to stream a movie for the littles in a moment of desperation). It was Alexandra (age 3) was the first one to point out that the “train is too wiggly for our work.”

I thought I had cleverly selected the items to entertain them on board, apparently, however, I didn’t quite hit the mark. The Lego’s were impossible to line up and connect with the movement on the train. The paper and crayons (the triangle ones that don’t roll!) didn’t prevent the train motion from making it hard to draw. And the no mess markers and special paper annoyed Victoria (age 3), too, not only because she couldn’t draw, but because (thank goodness) the markers “don’t work to paint my face pretty!”

Sleeping on the train was quite the experience. Henry (age 5) described it as, “Rock and Roll, baby! Rock and Roll!” But, as he pointed out, there are these little nets on the side of each of the (bunk) beds that will catch you if you fall out. I slept with my door open, and probably an eye open, too, just in case one of them wandered out into the hall.

De-boarding the train was super easy! Our car (that rode with us) was waiting for us under the canopy as we exited our gate. No car seats or luggage to wrangle, just hop in and drive away. My little bubble was popped as I quickly found out that my mini-me is a flatlander, too. The car drive that was supposed to be six hours took us almost ten. Alexandra (age 3) was carsick most of the way, “I didn’t know something so stinky and gross could come out of me like that. In two different ways!”

Luckily, I had a bag packed with paper towels, blanket, spare clothes, wet wipes, chlorine wipes, and Lysol. I just didn’t expect to use it three times. Exhausted, we stopped at a McDonald’s so that they could rest, play, eat, take Dramamine, and wash the car seat – crossing my fingers that it would stay clean.

Finally on the road again, I gave them each a cookie sheet and small bag of magnets. They selected five to ten, arranged them on the sheet in a picture, and then told us a story about them. We all agreed that George’s (age 3) story was our favorite. “One day, there was a spaceman, from planet earth, who was also a cowboy, and he could to Luna, the moon, and she could help slow down the ocean tides so that people wouldn’t get seasick any more. Even if they were in a car!”

A few more hours in and we needed another rest stop. This time I picked a park and playground where there just happened to be lots of birthday parties. Somehow, they got themselves invited to one while they were playing at the playground nearby. Henry (age 5) excitedly instructed me to dig out the paper and crayons so that they could all make pictures as presents. I was nervous about letting them eat cake and ice cream and then getting back in the car, but hey, what the heck, we are on vacation!

Back in the car again (with at least a trillion potty stops – I swear the diaper stage was easier), we finally made it to our camp just before dark. I unbuckled them and let them sleep (because no one in their right mind wakes a sleeping toddler after a long car trip) while I got set up. While moving them into the tent, Victoria (age 3) said, “Wait, what?! Where is our hotel?” Luckily they were all back asleep before I had to answer that question. 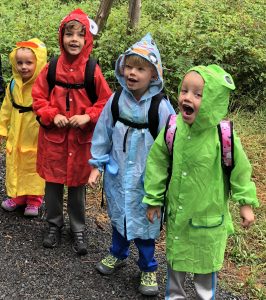 It rained every day of our trip. Not the quick rain of Florida where you can just wait it out, but the drizzling, everything is dreary and wet rain that lasts all day and night. Alexandra (age 3), observed, “this really isn’t like our Florida rain that starts and stops in minutes, it just keeps going and going and going. That sun can’t get through at all!” On the second or third night (it’s all a blur now), we were in the tent by seven p.m. and I found myself just listening to patter of the rain falling and my four littles breathing quietly as they sleep. There was nothing to do but listen and reflect with gratitude on our day, which was truly a gift and really everything I wanted to do at that moment in time.

The rain didn’t stop our explorations, we donned our raincoats and backpacks and we were off. I love that they carry their own stuff now such as their snack, water bottle, orange emergency whistle, and change of clothes. I carry the first aid kit, the back up paper maps, and my camera phone. Leading our little group along the path, George (age 3) gets everyone to chant a call-and-response, “How do we work? Teamwork!”

Chagrined, completely muddy, and thoroughly content, we took long baths when we returned in the middle of the afternoon before trying our hands at water colors, which was also fitting for the weather. At dinner, I was lamenting to another parent camping with a nine year old that the inclement weather was unexpected and somewhat disappointing. Henry (age 5) chirped up, “Mama, unexpected helps us to know our strengths and to see where we still need to learn.”

By day four of rain, I couldn’t take it any more. We hopped in the car for a LONG detour until we escaped the rain and ended up at the North Pole (NY)! The littles were enchanted with this era 1949 park and playground. Santa’s house particularly captivated Victoria (age 3). “ See Mama? He doesn’t put his pajamas away either! And look, he keeps hot chocolate cooking on his stove. That must mean that chocolate is really a good food to eat all of the time. I have some great decorating ideas for him though.”

George (age 3), of course, was drawn to the rides, from the carousel of reindeer, to the ornaments spinning lift, to the train with elf houses along the route, to the bobsleds and roller coaster (that he barely met the height requirement and required an adult to ride with him), he embraced them all with the jubilant enthusiasm that only George brings into our world. “Mama, this is amazing! So much fun everywhere I turn. Over and over again. Thank you, thank you, thank you, for finding this fun just for us!”

Alexandra (age 3) was tempted by the magic of it all. Dancing life-size “cuddlies” (stuffed animals), talking Christmas trees, magic snowflake wands, elves that somehow knew her name, the wonder of it all captured her imagination. She wishes on the first star we see at night as well as shooting stars we happen to catch, she builds houses for the fairies and looks for the unicorn hoof prints of the one who visited her and kissed her forehead in the middle of the night, and she thinks that houses all have secret rooms, if only you can find a key. She sang a camp song we just learned to her new little group of elf friends, “Magic is the sun that makes a rainbow out of rain, and magic keeps the dream alive to try and try again, magic is the love that stays when good friends have to leave. I do believe in magic, I believe.” 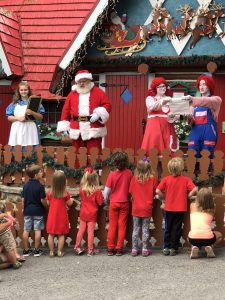 Henry (age 5) was, of course, enamored to the big man, himself. You see, Henry believes he was born at the North Pole, on Christmas Day, only to be delivered to me a week later: (on New Year’s Eve) when Santa realized he wasn’t really an elf. His middle name is “Elvin”, which means “friend of elves.” He explained this to Santa, who, without missing a beat, responded, “I wondered what happened to you once I dropped you off in Florida!” Yup, this “Santa” picked up on clues I was giving to the “elves” and honored Henry’s story. When asked what Henry loved most about Christmas, Henry responded, “I love that people practice being kind and generous. If we all did that all of the time, we wouldn’t have to be so brave because it would be okay to be different or to make mistakes.”

We definitely went to sleep, all nestled in our sleeping bags, with visions of sugar plums dancing in our heads.

On our last day we finally had enough sun to participate in traditional summer camp activities: lake swimming, ice cream making, hiking, costume trunk dress up, and S’mores at the campfire. The swimming proved to be the most amusing. After testing the lake water, Victoria (age 3) asked the lifeguard if she could “turn the warm water back on because the ocean feels too cold for people to swim and even the fish are barely moving around in it.” To be fair, the lake temperature was 69F and back home our beach water temperature is currently 88F. The lifeguard wisely responded, “I’m sorry, I don’t have access to that tap.” George outlasted everyone, only coming in when I demanded it because his lips were turning blue.

Toasting marshmallows and making S’mores topped off our near perfect summer camping day. And how could I resist giving each of them “some more”. Besides, sugar crashes at night help make sleep happen quickly. And, thus, our summer adventure came to an end. 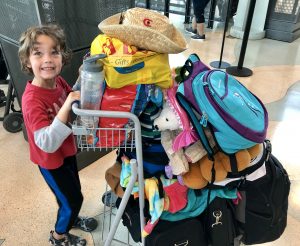 After a long drive back to the train station, we were all glad to be boarding the (overnight) train back home. Henry (age 5), “I love that no matter how far away we adventure, we always get to go back home when we are done.