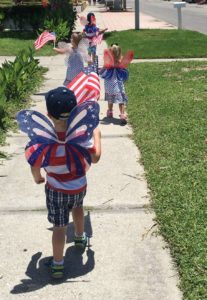 When I was about 10 years old, my grandfather heard me sobbing and found me under the dining room table reading The Diary of Anne Frank. He gently took me by the hand and led me to the front porch swing where he slowly rocked me until my tears dried. When I could finally find my voice, I asked how could people choose power and money over compassion and humanity. I waited quietly for his answer, watching the breeze ruffle the big old oak tree’s leaves.

Finally, he sighed heavily, and I can still hear his strong, clear voice say, “My gentlest soul, my father fled his home country with only a back pack and his children after years of resisting the cruelty of people who claimed power through violence and fear. These people in power even had to identify the people they were scared of by sewing on yellow stars or pink, green, red, black, brown, or purple triangles because they were actually so similar that they had to mark how they were different. My father, however, taught me that no matter what our country’s leaders were saying, we value our human differences and welcome people with joy to share in our blessings. And when people are so scared or hurt that they become cruel towards others because of who they are, then we stand up and shout out and figure out how to heal their hearts, both the hearts of those that were so unfairly treated as well as those that are so afraid of the what they think they believe is true.”

With that, he patted my knee and went to work in his garden. I wandered inside to find my own diary, and then found my way back to the porch swing. I wrote down his words (or what I remembered of them). And at the bottom of that page I wrote, “And I am his legacy.”

This morning, Henry, age four, found me crying as I was reading again the cruel directives towards my LGBTQIA community that occurred on Wednesday. In April, I was celebrating that the 7th Circuit Court of Appeals in Chicago ruled that the Civil Rights Act prohibits workplace discrimination against LGBT employees. However, on Wednesday, the Justice Department filed an amicus brief saying that Title VII of the Civil Rights Act of 1964 does not cover employment discrimination based on sexual orientation. The same day that a directive was TWEETED to exclude people who identify as transgender from serving in the military.

I explained to Henry that I was so very sad because people who are scared and in power are making big, big decisions that actively hurt lots of people. With huge eyes, he looked at me and asked if they are hurting me. And I responded yes, as well as many of our friends and friends that are yet to be. Henry said, “Hold on Mama. I’ve got a great idea. I’ll be right back.” I listened carefully to the commotion coming from the playroom and resisted following him to see what he was scheming.

About 10 minutes later, Henry returns with the triplets in tow. “Mama. We figured this out. We have glow sticks to help people to find the light inside of them so they can find their way out of the dark. We have “happy dust” (glitter) to sprinkle on people so that their frozen hearts can thaw. And we have our fairy wings so that we can fly out of danger if it takes more than one try. Mama, WE ARE THE RESISTANCE!”

This is my legacy. So with glitter and glow sticks and fairy wings, we are off to seize the day!