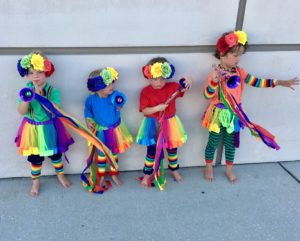 A Pride event with four toddlers is a humbling experience. We started of at the nearby playground to get some of the wiggles out before heading to the “Pride Party,” as they dubbed it. They helped select their outfits. Looking at the results, I sort of thought a rainbow threw up on them. They were easy to keep an eye on though. And, of course, they wanted noise makers and dance ribbons. What better event for this?

Henry noted that there were a variety of people expressed their gender, especially during the Trans Pride group. Henry leaned over the railing catching one of the marchers attentions saying, “excuse me, are you a he or a she or a they?” Startled, she responded, “a she.” To which Henry handed her a necklace saying, “Well, you are just beautiful. Happy Pride Day!” And she accepted the necklace with grace and blew him a kiss.

The triplets were a little more overwhelmed with people who wanted their picture. But they quickly got the hang of things when they realized candy and necklaces and trinkets were being given to them. Dancing and clapping and high-fiving anyone that got close to them. Alexandra exclaimed, “This is crazy fun!” To which George and Victoria readily agreed.As we were walking back, Henry stopped to talk to a police officer, saying to him, “Thank you for protecting all of our people and my family and my friends so we can celebrate just being who we are.”That about sums it up. Participating in a Pride event means that we have a place for our family to just be our family.